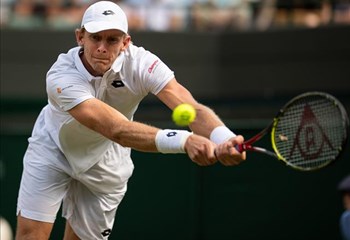 Kevin Anderson - Getty
Kevin Anderson leads the South African contingent in the US Open when the final Grand Slam of the year starts at USTA Billie Jean King National Tennis Centre in New York, the United States, next Monday.

The 16th seed will take on United States teenager, Zachary Svajda, in the first-round stages of the singles matches with the tournament draw conducted on Thursday.

Lloyd Harris will play a yet to be established qualifier opponent in the singles next week, with the qualifying matches currently underway at Flushing Meadows. Raven Klaasen will participate in the doubles matches with the draw yet to be conducted, with Kgothatso Montjane featuring in the wheelchair tennis tournament that will start from Thursday, 5 September.

Anderson is no stranger to the hard-court surfaces having finished in a runner’s up position two years ago after losing to Spaniard superstar, Rafael Nadal. Nadal will be entering the fray as the tournament’s second seed behind Novak Djokovic from Serbia.

Anderson went through a fantastic purple patch between 2017 and 2018, where he also made the final at Wimbledon. The 33-year-old is still in search of an elusive Grand Slam title after having shaken off a spate of injuries that have limited his participation this year.

In recent months, a knee injury has seen him miss a number of tournaments even though, the break might have done him a world of good and more time at home with his recently born son.

The tournament also provides the unseeded Harris with a chance to progress through to the next stages and equal his best showing in his young career so far – a second-round place at the French Open in June.

Harris is now ranked inside the top 100 (99th in the world) from the latest ATP rankings released this week.

Klaasen, meanwhile, moved one place higher in the doubles’ rankings to eighth in the world with his New Zealand double partner, Michael Venus, one position behind him. The duo came agonisingly close to a first major tournament victory last month when they were eliminated in the semi-final stages at Wimbledon.

Montjane, the first African wheelchair tennis player to play at all four Grand Slams, was also a semi-finalist in London and will look at yet another impressive showing in a fortnight’s time.

Fritz sends Anderson crashing out of the Australian Open