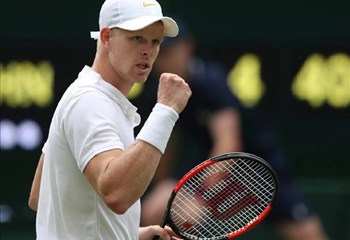 Kyle Edmund - Getty
The 2019 edition of Wimbledon is just days away and the excitement is mounting. While the main draw begins on Monday, the qualifying started on two days ago.

The talk of the town it that of the legendary Roger Federer who will be looking to deny his age and win the years third Grand Slam.

He will have to get past the likes of Novak Djokovic and Rafael Nadal, and even last year’s losing finalist, Kevin Anderson, of South Africa.

The Johannesburg-born British number one, Kyle Edmund, says it always exciting to play in a home Grand Slam.

“It’s my second year that I’m doing it. It doesn’t happy every time.

“You always get that buzz. The British crowd, they are always looking for the British number one, and how he is doing.

“You just get a lot of support.

“To represent your country and the British number one, in your home Grand Slam, and probably the biggest tournament in the world is quite a cool thing.”

The draw for the grass-court Grand Slam will be done on Friday.