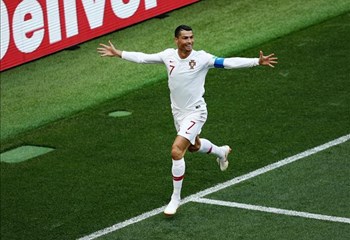 Cristiano Ronaldo - Getty
The 2018 FIFA World Cup in Russia has approached its business end, with the round of 16 is being confirmed this week.

From today until Thursday, all matches in each of the eight groups will be played at the same time in order to avoid any match-fixing.

In Group A it has already been confirmed that the host Russia and Uruguay will be advancing to the knockout rounds, while Egypt and Saudi Arabia will be returning home.

Group B, will be decided this evening and the 2010 champions, Spain, Portugal and Iran all still stand a chance of making the final 16. Morocco have already been eliminated, however, could still leave their mark on the tournament if they are able to beat the Spanish in Kaliningrad.

The pressure is, however, on Portugal in Saransk this evening, as they are up against Iran, who will advance if they are able to win this evening.

Portugal are favourites to advance along with the Spanish, however, need to secure at least a single point to seal the deal.

Spain, in their turn, will really fancy their chances against the team from North Africa, however, the coach Hierro Fernando warns that Morocco will make it very difficult.

The Spanish defender, Sergio Busquets, will have his work cut out this evening in order to prevent Morocco from causing a major upset.

Busquets, say even though their opponent occupies the bottom of the group, with no points, they will be no push-over this evening.

Both the match in Saransk and Kaliningrad kicks off at 20:00.

Tomorrow afternoon at 16:00, Australia and Peru go head-to-head at the Fisht Stadium, and Denmark face France at the Luzhniki Stadium in Group C.

At 20:00 tomorrow night Nigeria take on Argentina at Saint Petersburg Stadium and Iceland lock horns with Croatia at the Rostov Arena in Group D.