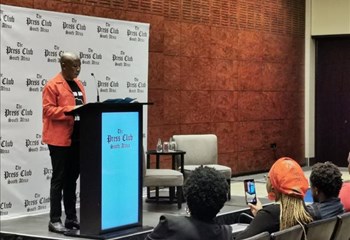 South Africa is in a general state of crisis, and President Cyril Ramaphosa's state of the nation address on Thursday night offered no solutions, Economic Freedom Fighters' leader Julius Malema said on Friday.

Malema made the comments hours after the militant EFF disrupted Parliament on Thursday night, saying it would not allow Ramaphosa to make his speech before firing public enterprises minister Pravin. The party was also angry at the presence in the house of former president FW de Klerk, South Africa's last white leader.

"The state of South Africa is one of hopelessness ... I am not just speaking about the current crises we are facing," Malema told a breakfast meeting organised by the Press Club in Cape Town.

Ramaphosa's speech was delayed by some 90 minutes with constant heckling from the EFF, which first rose to demand that de Klerk leave the public gallery, branding him "a murderer" over a recent interview in which he denied that white apartheid rule in South Africa was a crime against humanity.

Before eventually walking out of the Parliament chamber ahead of Ramaphosa's speech in protest, the EFF also demanded that Ramaphosa fire Gordhan, accusing the public enterprises minister of worsening the crisis at state electricity utility Eskom, among other issues.