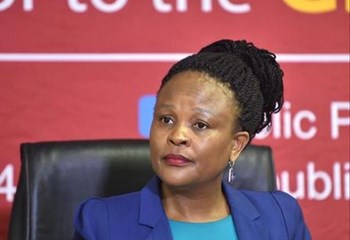 Public Protector Busisiwe Mkhwebane has filed an application in the Western Cape High Court for an urgent interdict halting the parliamentary process to remove her as head of the watchdog office.

In court papers, she argues that the process in the legislature is flawed and unconstitutional.

Mkhwebane is asking that the process be halted, pending her main application to the court which begs that the rules adopted by parliament last year on the removal of those heading chapter nine institutions be declared invalid and unconstitutional and be set aside.

She is furthermore asking the court to compel the speaker of the National Assembly, Thandi Modise, to provide her with reasons as to why she agreed to a motion by acting Democratic Alliance chief whip Natasha Mazzone that parliament begin a process to remove her from office.

In the meanwhile, Mazzone issued a statement saying the DA had put forward the names of Judges Robert Nugent and Jeanette Traverso to serve on the independent panel that will assess the merits of the motion to remove Mkhwebane.

Mazzone said, "while Mkhwebane has every right to explore the legal options at her disposal, the DA is confident that the rules which have been adopted by parliament for the removal of heads of Chapter 9 institutions, are not only lawful but also in line with the Constitution".

She added that the public protector had staggered from one disaster to another as the country's courts criticised her findings and held that she had failed in the exercise of her powers.

60 CUT students back in court