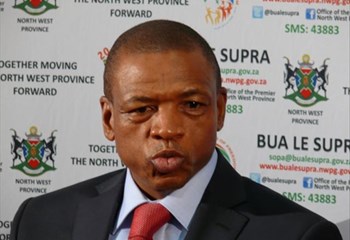 On Sunday, the ANC slammed Mahumapelo for saying the party would never support the Democratic Alliance’s (DA) motion to remove Mkhwebane from office. His comments came after National Assembly Speaker Thandi Modise approved the motion.

“As the ANC, we will never support a motion in the name of the opposition by the DA, it’s impossible,” Mahumapelo told the media on Friday.

The ANC then released a statement distancing itself from Mahumapelo’s comments, saying he wasn’t speaking on behalf of the party. The party also called on others in the organisation to “stop acting like leaders unto themselves”.

“The ANC, once again, reminds its members on the principle that informs organisational discipline as articulated through the eye of the needle that individual leaders are elected into collectives, which should work as a unit,” ANC spokesperson Pule Mabe said.

However, Mahumapelo said he didn’t regret what he said. He insisted that all he did was reaffirm the policy stance that the ANC doesn’t vote with the opposition.

“As cadres of the movement, wherever we are, our responsibility at all times is to defend the policy stance of the ANC,” he said.

High Court finds in favour of Ramaphosa in PP clash