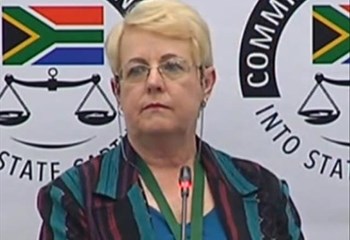 PHOTO: Eyewitness News
The controversial landing at Waterkloof Air Force Base of a plane full of guests for the Gupta family’s Sun City wedding in 2013 has come into sharp focus at the state capture inquiry.

Anderson is the first witness to appear before the inquiry, which resumed its work on Tuesday.

In charge of movements at Waterkloof, Anderson was put on special leave for about two years and then took early retirement without ever returning to work. A defence force inquiry cleared her of any wrongdoing.

Lt-Col Christine Anderson said that it was not her job to question who the passengers were on the Airbus 330, which had received the necessary official clearance to land there.

But she told the state capture inquiry she realised things weren’t above board when it appeared that no ministers were on the plane, as she’d been told there would be.

"The ministers were never introduced, so I assumed at that stage there were no ministers or the ministers were kept private. If you look at all the people that arrived there, all the additional helicopters, the vehicles – that has never happened before.

"I mentioned to (evidence leader) Advocate Norman yesterday that, at one stage, it felt like the base was captured by this Indian delegation."

Anderson says traditional dancers performed and a fleet of helicopters, vehicles and two fixed-wing aircraft stood by to ferry passengers to Sun City.

She also says it was unusual that then-chief protocol officer Bruce Koloane repeatedly told her former president Jacob Zuma was aware of plans for the landing, as this had also never happened before.

Hain warns of billions being laundered across the globe