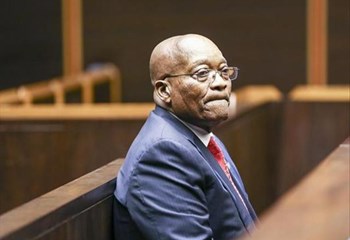 Sikhakhane revealed the dates – October 20 or November 11 – during his arguments in the KwaZulu-Natal High Court on Friday.

Former cabinet minister and ANC member Derek Hanekom took Zuma to court to sue him to the tune of R500 000 for defamation, after the former president tweeted that Hanekom was a "known enemy agent".

But Sikhakhane said they can't block Zuma, adding that when he returns to the Zondo commission, they don't know what he will be saying.

Zondo commission of inquiry spokesperson Reverend Mbuyiselo Stemela told News24 that the dates had not yet been confirmed.

"We will issue an advisory when we get close to the time," he said.

The former president made explosive claims when he appeared at the state capture inquiry in July.

Both men hit back, with Ramatlhodi challenging Zuma to a lie detector test and Nyanda saying he would consider cross-examining Zuma at the commission.

On July 25, Zuma tweeted that he was not surprised by statements made by EFF leader Julius Malema about Hanekom, revealing the ANC national executive committee (NEC) member had met the red berets in 2017 to discuss ousting Zuma as president.

Hanekom admitted talking to EFF secretary general Godrich Gardee, but said there was nothing untoward about the meeting.

On the same day, ANC secretary general Ace Magashule issued a statement on behalf of the party in which Hanekom was slammed as a "charlatan", "wedge driver" and an EFF sleeper.

A day later, Zuma posted a message in which he called his former cabinet minister "a known enemy agent".