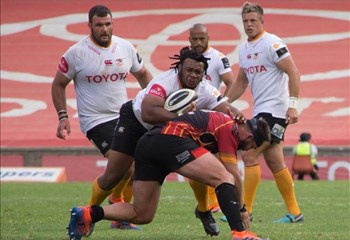 Coach Hawies Fourie has named an unchanged starting XV to the one which hammered the Southern Kings 45-0 a fortnight ago in Bloemfontein.

The only change to the squad in on the bench where Gerhard Olivier returns from injury to replace Daniel Maartens.

This means that there is still no Sintu Manjezi who injured his shoulder against the Kings during the first derby match.

The match will mark a special milestone for the Namibian international tighthead, Aranos Coetzee, who will become the first player to play in 50 PRO14 matches for a South African team.

Before their departure to Ireland, Fourie told OFM Sport that Coetzee is a valuable member of the team.

“He is one of the best scrummagers in the competition and that helps us a lot. A lot of the teams' scrum for penalties and that puts you under pressure if your tighthead is not up to standard.

“To me, the same thing goes for Luan de Bruin who is really close to Aranos. I still think that Aranos has got a slight upper hand in the scrum, but in general play, Luan is an exceptional tighthead.

“He also compliments Aranos in the same way that we have Wilmar Arnoldi backing up for Joseph Dweba, and Boan Venter for Charles Marais.

“It is nice to be able to send those front three guys on the field at 45-50 minutes, and ask them to do some damage.”

Fourie is also happy to have the loosehead, Charles Marais, on tour after he made his return to the park against the Kings following a long injury layoff.

“We missed him during the first part of the season.

“We had to shift Erich de Jager over to loosehead and we had to try Luan at loosehead just to provide cover until he recovered from his injury, so it’s great to have him back.”

Cheetahs eager to learn from mistakes in Dublin

Leinster to field internationals and youth against the Cheetahs