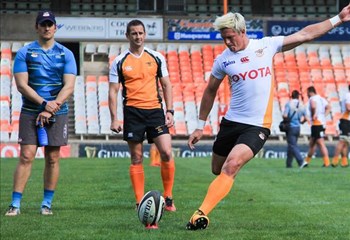 Albert Keuris, Jaco Kotze and Tian Schoeman - Morgan Piek
Toyota Cheetah Kicking- and Skills Coach, Albert Keuris, will be assisting the Italian National side from 20 to 28 January as a consultant at the training camp in preparation for the Guinness Six Nations.

In the 2017/18 Guinness PRO14 season, Fred Zeilinga won the Golden Boot (85% accuracy), which was the best statistic in a decade of PRO Rugby, with two other players also in the Top 10 with 83% accuracy.

In the 2018 Currie Cup the Toyota Cheetahs had the second-highest kicking success in the competition and Tian Schoeman made the most conversions in the 2018/19 Guinness PRO14 seasons. In 2019 the Toyota Free State Cheetahs won the Currie Cup with a kicking rate of 80%.

Pokomela would welcome the Cheetahs captaincy in future

We are in unusual times - Springbok coach Nienaber