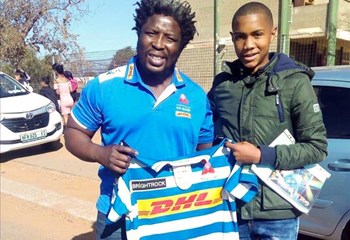 Scarra Ntubeni and Giovanni Fourie - Supplied
On Saturday evening while Western Province was still leading 33-19 against the Toyota Free State Cheetahs in their important Currie Cup clash a rather unsavory incident took place which involved a player and a ball boy.

The Springbok hooker, Scarra Ntubeni, slapped the ball out of the hands of the youngster who presented a ball to him before a lineout.

While in the heat of battle a player can make a mistake and set a bad example, there is no excuse for such behavior.

The player did, however, take the time and opportunity to right the wrongs of his actions and apologised.

Ntubeni did apologise to the kid and his parents after the game and signaled his intentions to meet up with the kid on Sunday morning.

Ntubeni met with Giovanni Fourie, a learner at Grey College.

The player, who became a Springbok just a week prior, presented the Grey U16A hockey player with a Western Province jersey and apologised for his behavior in person.

While the players' behavior was met with widespread criticism, players such as the former Springbok flanker, Jaco Kriel, took to Twitter to voice his opinions as well.

Kriel offered the youngster a pair of rugby boots in a tweet.

"Not great to see this happening... hope there is a good explanation my man????

"Does anyone know this ball boy? Would like to give him some boots for his calm behavior??"

Cheetahs target better setpiece and breakdown against the Dragons

Young Blitzboks know all about patience and determination

Belfast leaves a lasting impression on the Cheetahs