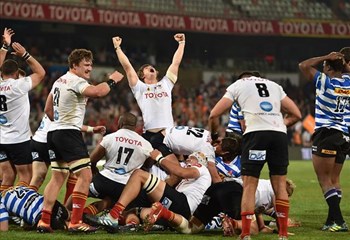 Benhard Janse van Rensburg - FS Cheetahs
The Toyota Free State Cheetahs fought back from 19-0 down to beat Western Province 38-33 on Saturday in Bloemfontein to finish at the top of the table in the Currie Cup and thus secure a home semi-final.

Character and guts describe the second-half performance by Franco Smith’s charges to wipe up a substantial lead by the 2018 finalists and eliminate the team from the Mother City.

Ill-discipline by the Cheetahs in the opening exchanges saw Western Province race to a 12-0 lead courtesy of four penalty goals via the boot of the winger, SP Marais.

Province extended that lead to 19-0 when the Springbok tighthead prop, Wilco Louw, flew over under the posts for the first try of the match. Marais had no trouble in adding the extra two points.

Mere minutes later the Cheetahs struck back to get onto the scoreboard after the centre, William Small-Smith, crossed the whitewash in the left corner. Tian Schoeman was however not successful in landing the conversion.

With two minutes to play before the interval, the Springbok outside back, Dillyn Leyds, dotted down for a converted try to extend Province’s lead to 26-5.

On the stroke of half time the Cheetahs hooker, Joseph Dweba, crashed over for a crucial try, to cut the visitors lead down to 14 points.

Scarra Ntubeni, who made his Springbok debut just a week prior, opened the scoring in the second half with a 45th-minute try.

The Cheetahs come back was mounted in the 49th minute when the captain, Tian Meyer, scored a try and less than five minutes later, Darren Adonis, scored another for the home side. The try by Adonis also secured the crucial bonus-point for the Cheetahs.

The game was tied in the 60th minute when Ox Nche crashed over for a try to levels matters at 33-33.

The replacement loose-forward, Jasper Wiese, scored the winning try in the 73rd minute. Once again, Schoeman was unable to convert.

The Cheetahs absorbed sustained pressure by Province in the final five minutes to ultimately win the game and advance to the semi-finals.

The win means that the Cheetahs will play at home in the semi-finals, against most likely the Sharks*.

* At the time of publishing the match between the Blue Bulls and Sharks at Loftus Versfeld in Pretoria had not been completed.