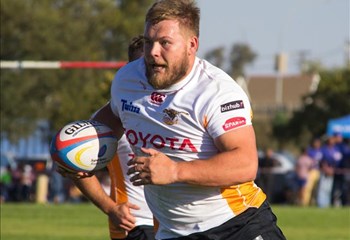 Boan Venter is on debut for the Toyota Free State Cheetahs this week - Morgan Piek
The 2019 Currie Cup heads into the final round of round-robin matches this weekend ahead of the semi-finals, as it stands it is one of the most open races in many years.

The current leaders, Griquas, who have 19 points, are the only one of the seven teams that have already confirmed a place in the semi-finals. This weekend will, however, determine whether they host or travel next weekend.

A win for the Peacock Blues over the Golden Lions in Kimberley will secure a home semi-final, while if they lose they could be knocked down to fourth.

The Toyota Free State Cheetahs’ destiny is truly in their own hands this weekend. They have proven to be one of the better teams this season, however, at times they have also been their own worst enemy. They are the only team to have beaten the Griquas, and it was also in convincing fashion with a 68-14 drubbing in Bloemfontein. However, against the Golden Lions and Sharks, silly mistakes lead to narrow defeats, while against the Pumas they were made to work hard to keep their chances in the competition alive.

A win on Saturday against Western Province will secure a home semi-final. If the Griquas lose to the Lions, the Free State will finish at the top of the standings. If they lose to Province, and the Lions and Sharks win, they will be knocked out.

The Golden Lions are still in for a shout at a home semi-final. While they are on 17 points along with the Free State Cheetahs, the team from Bloemfontein has a far superior points difference. A win over the Griquas in Kimberley and losses for the Cheetahs and Sharks will see Ellis Park hosting a home semi-final next week. If the Lions stumble against the Peacock Blues, and the Sharks and Western Province pick up wins, they will be knocked out.

The Sharks are in for a shout at a home semi-final as well, but this will require a win at Loftus Versfeld over the Blue Bulls, along with the Cheetahs losing to Province, and the Lions losing to the Griquas. If the Sharks lose to the Bulls in Pretoria and the Province are beaten by the Cheetahs, the Sharks’ campaign will be a thing of the past.

The Blue Bulls have the least likely chance of reaching the last four, however, it is not impossible. They will need a bonus-point win and a victory margin of 12 or more points over the Sharks at Loftus Versfeld. They will also need to prevent the Sharks from getting a bonus-point in the match. In addition, they will be backing the Cheetahs to eliminate Western Province.