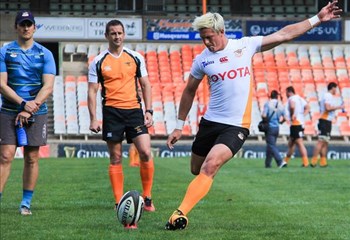 Schoeman has recovered from a calf injury he sustained against the Golden Lions, and he will be taking charge of the backline once again.

In another major change to the backline, William Small-Smith moves from wing to inside centre, where he will partner Benhard Janse van Rensburg. This move paves the way for Darren Adonis to start on the after he too has recovered from an injury.

Ruan Pienaar will once again start at scrumhalf, with the captain, Tian Meyer, playing on the left-wing.

Upfront the most notable change is at tighthead prop, where Boan Venter dons the number three jersey. The Namibian international, Aranos Coetzee, will play off the bench.

Joseph Dweba also returns to the starting team, with Jacques du Toit moving to the replacements.

Schalk van der Merwe will once against start at loosehead prop.

In the second row, Sintu Manjezi earns a start at the expense of JP du Preez, however, he swaps jerseys with Walt Steenkamp. In the backrow, Abongile Nonkontwana moves back into the starting team, with Gerhard Olivier, rotating back to the bench.

A win for the Cheetahs will be crucial to confirm their spot in the semi-finals, but booking a home semi-final will be the first prize.

Meyer told OFM Sport they cannot afford any soft moments against the team from Cape Town.

“After the two previous close loses getting the win in the next match was great. The boys are all positive for this week and the training has gone well.

“The excitement is high for the game and we are excited about the possibly pulling it through.

“At crucial moments you can play the best rugby out there and it takes one or two errors at the wrong time it can go the other way. We’ve seen that this season. Focus for the form game and being at our sharpest for the full 80 or minutes, or however long we are out there will be required.”

Saturday’s game at the Toyota Stadium in Bloemfontein kicks off at 17:15.