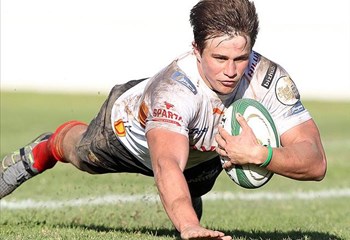 William Small-Smith - Gallo
Controlling the controllable will be the Toyota Free State Cheetahs mission for their big Currie Cup game against Western Province on Saturday.

A bonus-point win for the Cheetahs will almost assure them of a home semi-final in the competition, while if the Griquas lose to the Golden Lions, they can finish at the top of the standings.

A win will also secure their place in the last four, however, a home semi is the goal.

The winger, William Small-Smith, told OFM Sport that they must just focus on their own game.

“I must say that it has been a good week of preparation for us. The thing that we keep on coming back to, is that we can only focus on what we do and what we do well.

“There is a lot of speculation coming down to the last week of the Currie Cup but we are not in control of that. The only thing we can do is to do something on the field, and that is what we are going to try and do this weekend.”

Meanwhile, John Dobson has named a loaded Western Province team for the match, and his team will field some familiar faces against the Cheetahs.

These include the former Cheetahs winger, Sergeal Petersen, as well as, the former Junior Springbok centre and Grey College captain, Rikus Pretorius. Pretorius will be on debut for Province this week.

Saturday’s game at the Toyota Stadium kicks off at 17:15.

Manjezi returns to start at Ravenhill

'They see Ruan as the Mayor of Belfast' - Coetzee