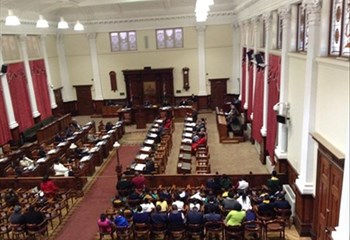 The Free State and North West Legislature will both have their first sitting on Wednesday, where Speakers, the Deputy Speakers, Chief Whips, and the two Premiers will be elected.

The sixth Democratic Parliamentary term officially commences this week, with the registration and swearing-in of Members of Parliament (MPs) and Members of Provincial Legislatures (MPLs).

Spokesperson for the Free State Legislature, Life Mokone, and Secretary of the North West Legislature, Oageng Mosiane, have confirmed that all preparations are running smoothly and it is all systems go.

Mosiane added that Judge President of the Mmabatho High Court, Judge Monica Leeuw, will preside over the inauguration of members at 10:00 on Wednesday, and is certain an announcement on the North West premier-elect will be made by then.

This, as the country today marks a week since it has been awaiting an announcement by the ANC National Executive Committee (NEC) on who will take the reins in the North West, after it announced the names of seven premier candidates for the eight provinces it retained in the general elections held on May 8.

The ANC Women’s League are meanwhile pushing for former speaker of the North West Legislature, Susana Dantjie; former mayor of the Dr Kenneth Kaunda district municipality, Pinky Moloi; or the League’s national secretary-general, Meokgo Matuba, to be appointed as the premier of the troubled North West.

The party’s alliance partners in the province have on the other hand appealed to the ANC NEC to retain Job Mokgoro as the premier. Mokgoro was appointed last year after former premier Supra Mahumapelo tendered his resignation following months of service delivery protests and mounting calls for him to step down.

About the Writer:
KATLEHO MORAPELA


Katleho Morapela is a journalist for OFM and a student of life.  She has completed a BA Honours degree in Communications Science with speciality in Media Studies and Journalism at the University of the Free State.  Her career into the broadcasting media started off at Lesedi FM asa programming content producer intern and later joined the team at OFM News. If she is not listening to radio, reading a book, or enjoying outdoor activities with friend and family, she is most probably with her little ‘bundle of joy’.