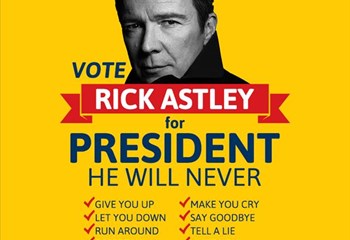 OFM, the sound of your life in Central South Africa, is making its political intentions clear on national voting day, 8 May 2019.

OFM wants Rick Astley for President! The reasons why are obvious.  Astley is never going to give you up, let you down, run around or desert you. Furthermore, he will never make you cry, say goodbye, tell a lie, or hurt you.  All admirable qualities in a presidential candidate, we feel.

Jokes aside, OFM is trying to bring a little humour to a very serious and important event – choosing South Africa’s leadership for the next five years.

On voting day, OFM will be celebrating the iconic Rick Astley, whose song “Never Gonna Give You Up” catapulted him into the world of pop in 1987.  The song was a worldwide number-one hit, topping the charts in 25 countries and was the best-selling single of that year.

Says OFM’s Marketing Manager, Lindiwe Mtwentula: “Electing a new leadership for our country is a very serious matter.  As a commercial radio station, we want to give our listeners something to smile about on the day.  As our listeners prepare to face queues and make important decisions, we want to entertain them a little bit and give away some money. And what better way than through the music of an 80’s icon?”

Tune in to OFM on election day or go to www.ofm.co.za for all the coverage of the 2019 national elections.