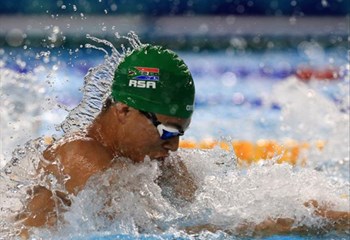 Michael Houlie, @Zimbio
With the African Games having started their swimming programme at the 12th African Games in Morocco, Team South Africa have started with a bang, bagging ten medals.

The first of the South African Medals landed around the neck of Michael Houlie, who secured a gold medal in the 50m breaststroke, stopping the clock at a time of 27.41, finishing ahead of Egyptian swimmer Youssef Elkamash and Tunisia's Wassim Elloumi.

Martin Bindell was part of the medal parade too, winning gold in the 200m backstroke. Bindell went on to win gold alongside Douglas Erasmus, Brad Tandy,  and Ryan Coetzee in the 4x100m freestyle relay in a time of 3:21:63.

The gold rush did not end there, as Erin Gallagher won gold in the 100m freestyle, while her teammate, Emma Chelius, won bronze in the same event. The same two ladies were involved in the team which won the 4x100m relay and they were assisted by Kerryn Herbst and Jessica Whelan.

Other winners for Team South Africa were Kaylene Corbett and Christin Mundell who took gold and silver respectively in the 50m breaststroke, in times of 32.20 and 32.70.

Samantha Randle and Carla Antonopoulos were silver and bronze medal winners in the 1 500m freestyle, both touching the wall at times of 17:11.07 and 17:22.15 respectively.

The African Games will continue until August 31.

Maharaj called-up for the Proteas ODI series against Australia