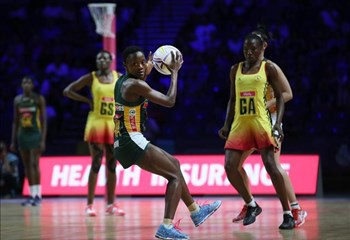 Bongi Msomi - Reg Caldecott
The Proteas will look to finish the group stage of the 2019 Netball World Cup in Liverpool on a high note when they face the host England on Thursday evening.

South Africa face their biggest challenge yet at the World Cup, however, after qualifying for the semi-finals for the first time since 1995 the confidence is high.

South Africa will also take a lot of confidence from their outstanding win over the world number two’s Jamaica earlier in the competition.

Last night South Africa were ruthless in the final quarter to beat Uganda 67-40 and thus book their place in the last four.

The last time South Africa played against the Commonwealth champions, they reigned supreme, but the Proteas goal shooter, Lenize Potgieter, warns they will be a different team.

“We have beaten them before and I think that we have always had that in the back of our minds,” said the player of the match against Uganda.

“We know that they are a brand new team, and they are going to come at us giving everything that they've got. They will also have the crowd backing them all the way as they are the host country.

“We have forgotten about that previous game because England’s team is brand new and we will just focus on the upcoming game.”

England, Australia and New Zealand are all in the semi-finals as well, and the Proteas versus Roses clash will determine who plays against the team from the Land of the Long White Cloud, or the team from Down Under.

Thursday nights’ game gets underway at 20:00.