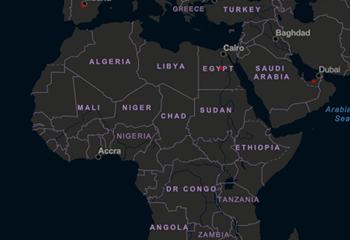 Egypt's health ministry on Friday announced the first confirmed case of the novel coronavirus in Africa.

The sufferer was not Egyptian, the ministry said in a statement, without specifying the nationality.

"The ministry has taken preventative measures and is monitoring the patient... who is stable," said health ministry spokesman Khaled Megahed.

Egyptian authorities had notified the World Health Organization and the patient been placed in quarantined isolation in hospital.

The death toll from China's new coronavirus epidemic jumped past 1,500 on Saturday but new infections fell following a mid-week surge caused by a change in the way cases are counted.

More than 66,000 people have now been infected in China from a virus that emerged in central Hubei province in December before spreading across the country a month later and causing global panic.

Some 1,700 medical workers have been infected, with six dying from the COVID-19 illness, officials said, underscoring the country's struggle to contain the deepening health crisis.

Deep trade links with China and often overstretched healthcare systems have raised concerns about the capacity of African countries to respond to an outbreak.

Earlier this month, Egypt suspended all flights on its national carrier to China. They will remain grounded until the end of the month.

Three hundred and one Egyptians were evacuated from Wuhan, epicentre of the virus in China, and have remained in quarantine for 14 days.

Denosa could head to court over protective gear