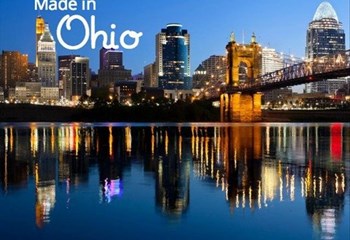 Two Ohio mothers separately raised concerns about something their kids were asked to do by a youth football league: sell tickets to raffle off an AM15 rifle.

Brittain was shocked that such a weapon would be part of a youth fundraiser. She was concerned about her daughter asking adults if they wanted a chance to win a gun.

"We live in a world where you don't know if Bob down the street is okay with guns. So why would I take my 4-year-old daughter down the street to meet Bob who's not okay with it? And now he knows my face and my daughter's face," Brittain told WKRC.

While the cheerleaders' raffle prize was an AM15, the football team is selling raffle tickets for a Glock 9 mm. Club president Robert Wooten told WKRC all the media attention actually resulted in an increase in ticket sales.

"Say one of the kids in the high school got a hold of it — got the AR-15 or AM15 and shot up a school with it, and I'm the one that sold the raffle ticket to his dad?" concerned mom Heather Chilton said.

The father of five said the organisation has been raffling rifles for four years. Parents were allowed to opt-out of the rifle raffle this year, and Brittain said she did.

CBS News asked Brittain if she would like to comment and she said: "Not at the moment. The league resolved all of my issues, and we peacefully agreed to be content on where we all stand."

At least one other mother complained about the gun raffle. Heather Chilton told local TV station WXIX she was excited for her 7-year-old daughter to join the cheer squad, but now she's fired up that a semiautomatic weapon was part of the team's fundraiser.

"This is absurd, you're having elementary kids sell your AR-15. Why?" Chilton told WXIX. "I highly doubt that something would happen with the gun — but say it did. Say one of the kids in the high school got a hold of it — got the AR-15 or AM15 and shot up a school with it, and I'm the one that sold the raffle ticket to his dad?"

"I can't see them selling some type of semi-automatic rifle when we have all these mass shootings going on, going door to door," the mother of three daughters said.

Firearms amnesty period extended to May 2020