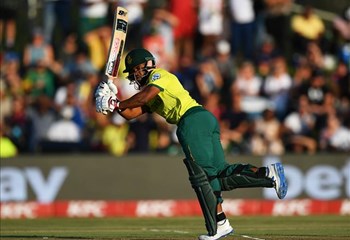 Temba Bavuma - Cricinfo
A series victory will be in the Proteas sights when they host England on Friday night at Kingsmead in Durban in the 2nd T20 International.

South Africa went 1-0 up in the series of three matches with a 1-run victory over the English at Buffalo Park in East London on Wednesday night.

At one stage South Africa was staring down the barrel of defeat. After a very good start with the bat South Africa was on course to post 200-plus runs in their innings, however, the runs dried up somewhat in the middle overs.

The 177-runs scored but South Africa definitely a decent total, but on a good batting pitch, they were without a doubt shy.

Needing just seven runs to win in the final over, England, were well on their way to winning the clash, but a fine piece of death bowling by Lungi Ngidi sealed the victory for the Proteas.

Ngidi says with the T20 World Cup in mind, all is positive in the camp at the moment.

“I think that way a very good start with the T20 stuff, in terms of just to know what you’ve got in the camp after a first series like this.

“I think that it will be a massive positive for the South African team, and know that we still have guys that come in and fill spots is very exciting as well.

“I think that it very good for us that we have seen something like this already.

“There is still a lot of cricket to be played, so we are still out to see a lot of players come out and shine.”

Meanwhile, it would appear that the Proteas planned three-match T20 tour of Pakistan in March has been scrapped. This is due to fears of player fatigue heading into the T20 World Cup.

South Africa will still host Australia as from next week in three T20’s and three One-Day Internationals.

Play at Kingsmead will start at 18:00 on Friday evening.