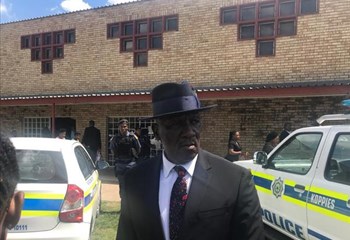 Police minister Bheki Cele has described the killing and wounding of two Free State police officers by foreign nationals as an act of treason.

He slammed the killing of the 41-year-old Galeshewe Llyod Poonyane and the wounding of 45-year-old Lydia Tladi this morning while attending Poonyane's funeral in Rammulutsi in Viljoenskroon near Bothaville.

While addressing the mourners, including colleagues from the South African Police Services (SAPS), he said it was difficult to accept and understand the killing of police officers by foreign nationals in their own country. Cele further told mourners that he was pleased with the swift arrests of the four suspects who are said to be relatives from the neighbouring country of Lesotho.

He has also demanded to be furnished with a full report on the attack of Poonyane and Tladi.

Poonyane and Tladi came under attack in Orkney in the North West where he was killed and Tladi injured when at least five suspects fired shots at them after an argument.

Meanwhile, speaking on behalf of the family, Pinkey Mathoma told mourners that the deceased was humble, loving and had always preached peace. She says Poonyane will always be remembered.

Poonyane is leaving behind his wife, two children and his brother.

OFM News previously reported that in an exclusive interview on Friday, 14 February 2020 the provincial Commissioner Baile Motswenyane said according to information, three of the four which have been arrested are from the neighbouring country of Lesotho.

She also stated that the suspects who fatally shot Poonyane and also wounded Tladi had allegedly robbed a tuck-shop in Orkney near Kanana Township outside Klerksdorp before the incident. The four suspects on Wednesday appeared in the Orkney Magistrate’s Court and they were all remanded in custody. The case was postponed to 21 February 2020.

Meanwhile, the national police spokesperson, Vish Naidoo, previously told OFM News that the four suspects face charges of murder and attempted murder, amongst others, following their arrests on Sunday and Monday night respectively in Soweto and Secunda. These four are said to have shot dead Lloyd Poonyane and wounded Lydia Tladi in Orkney outside Klerksdorp after following up on a complaint in the Vierfontien area in the Free State.

Naidoo also said that a gun that was robbed from Poonyane was also retrieved from one of the suspects during his arrest in Soweto on Monday night. It's not yet clear whether the National Commissioner will visit the family of the two officers soon, as Naidoo says he has not yet received any correspondence about the plan to visit these families.

OFM News previously reported that five firearms, vehicles allegedly used during the proceeds of the said crime in Orkney, and several cell phones were recovered.