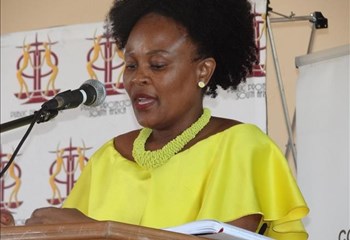 The Public Protector (PP) Busisiwe Mkhwebane says she will continue to do her work, without fear or prejudice, irrespective of who attended her 50th celebration over the past weekend.

This after concerns were raised about the attendance of Member of Parliament (MP) Mosebenzi Zwane, who is implicated in the controversial Estina Dairy Farm Project in Free State. Mkhwebane on Monday Tweeted that there was no conflict of interest as she also invited president Cyril Ramaphosa and his Deputy David Mabuza, who failed to pitch. Mkwhebane is yet to release a report into the project after her initial report was taken on review by the DA, accusing her of failure to indicate the role played by politicians. Beneficiaries who testified before the Zondo Commission of inquiry, implicated Zwane, former Free State premier Ace Magashule, and other senior provincial government officials for siphoning off over R220 million earmarked for the project, leaving them in limbo.

Mkhwebane came under scrutiny over Estina when her report into the project was set aside and declared unconstitutional after it was taken up for a review by the DA and Council for the Advancement of the South African Constitution’s (Casac), citing shoddy work on the report. The North Gauteng High Court also later dismissed her application to appeal the decision to set aside and declare the report as unconstitutional and further slapped her with personal costs. In her judgment, Ronel Tolmay found that Mkhwebane failed South Africans because of the way she conducted her investigation into the Vrede dairy farm project.

The Democratic Alliance once said the report failed to outline the role played by Magashule and Zwane, among other politicians, nor did it outline how anyone would be held accountable for the failed project. According to the leaked Gupta e-mails, about R30 million was used to pay for the family’s lavish Sun City wedding in 2013. Releasing several investigative reports last month, Mkhwebane vowed to release a report into Vrede Dairy stating that they are at an advance stage with investigations. She said they have concluded public hearings with all beneficiaries and interviews with several stakeholders including the implicated politicians.

App to assist with emergencies in SA during #Covid19 crisis

Weird Wide Web - Products you need in your life