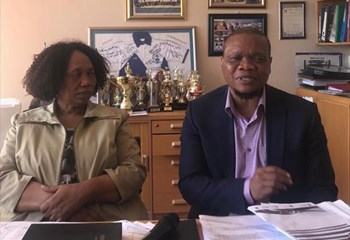 From left to right: Angie Motshekga and Tate Makgoe. Photo taken by Michael Tlhakudi.
Gang-related violence in some schools located in the Mangaung Metropolitan Municipality is still a serious concern that continues to negatively affect schooling in many areas.

This is according to Free State MEC of Education Tate Makgoe who was speaking to OFM News on the sidelines during an event focused on the Second Chance Programme at Kagisho Comprehensive School in Bloemfontein on Saturday.

Makgoe says gang violence continues to worry the department and he reckons using initiatives like the Second Chance Programme would go a long way in fighting the ever increasing scourge.

Makgoe’s sentiments come after members of a local gang known as Maroma threatened pupils in a number of schools around Mangaung a fortnight ago.

Police are reported to have responded to calls for assistance, preventing the situation from escalating further.

Communities in and around Mangaung have in recent times been engulfed by gang violence with gangs such as Maroma and Born To Kill (BTK) terrorising pupils in schools.

Makgoe says they are willing to work with gang members and create opportunities for them to further their studies.

He added there are no shortcuts in life and the only way to fight war against gangsters is through education.

Makgoe says programmes like Second Chance have the potential to change the lives of many young people who have resorted to gangsterism and drugs.