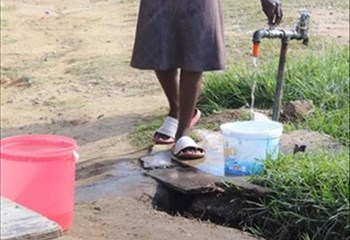 The embattled Maluti-A-Phofung Local Municipality in the Free State is facing yet another water crisis this year over low dam levels.

According to an alert from the municipality, residents in Qwaqwa, which includes Phuthaditjhaba and 12 surrounding villages, are facing water interruptions due to the fact that the Fiko Patso Dam, which supplies water to more than 80% of Qwaqwa, has reportedly run dry. The municipality says Jojo tanks will be deployed to the affected areas. There is no indication when the tanks will be deployed.

In February 2019, the water situation in Qwaqwa made national headlines when it was revealed residents had allegedly been without water for months on end. Assistant Administrator at Maluti-A-Phofung Local Municipality, Solly Motingoe, told OFM News at the time that in such instances when the water level at the dam is very low, water has to be pumped with a booster pump to get to where it is needed. The municipality’s booster pump was broken and the financial constraints made it difficult to have it fixed.

The Free State Department of Water and Sanitation weighed in on the ongoing water shortage in Qwaqwa at the end of February. The Department’s provincial head, Tseliso Ntili, told OFM News that their officials are continuing to play an advisory role and actively assisting the embattled municipality in the eastern Free State with drafting assessments of the situation and developing short to long-term goals to deal with the issue. Ntili also distanced his department from the blame, explaining that each sphere of government has powers and functions, and it is “therefore not the responsibility of one sphere to push another around”. The provincial head says the municipality is responsible for delivering basic services, not the department.