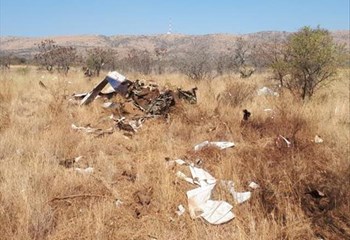 Photo: ER24
Two men died in a light aircraft crash at about midday on Saturday near the Hartbeespoort Dam, west of Akasia in the North West, paramedics said.

Search and rescue and the South African Police Service (SAPS) were already on the scene when ER24 paramedics arrived at 12.30pm, ER24 spokesperson Ross Campbell said.

"The bodies of two men were found in the wreckage - they showed no signs of life and were declared dead on arrival. It is unknown at this point as to the cause of the plane crash; however, the authorities are on site for investigations," he said.