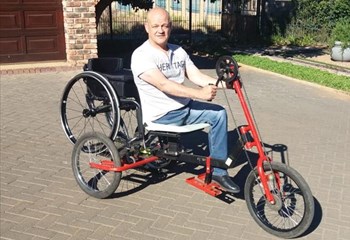 A three-in-one wheelchair designed by the Product Technology Station based at the Central University of Technology (CUT) has made it possible for Rensché du Toit from Mpumalanga to travel along the Camino in Spain.

Initially, the chair was being built for people in the rural areas, until du Toit called him about using it along the Camino Walk.

Van der Merwe explained that the idea behind the chair is to ensure that people in rural areas have a strong enough chair for their circumstances and for them to only buy a chair once and never again, as it is expensive. He added that together with the CUT, they have already trained two disabled people to make their own wheelchairs and this will be contributing to job creation as well. He also said they are currently busy with four demos that will be donated to people in rural areas.

Meanwhile, Rensché du Toit told OFM News that it was a dream to use this wheelchair as it allowed her access to places where she could never move before. She further explained that using this wheelchair has made her feel like an ordinary wheelchair will not do anymore.

Van Niekerk to run the 400m at FS Champs

About the Writer:
SAZLY HARTZENBERG