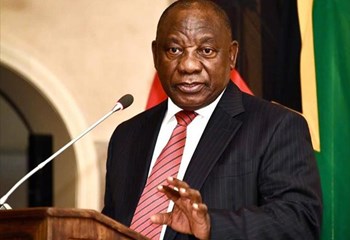 Pres Cyril Ramaphosa PHOTO: The South African
President Cyril Ramaphosa has in his State of the Nation Address highlighted agriculture as one of the industries with the greatest potential for growth.

Ramaphosa once again mentioned land expropriation last Thursday in his address, saying government stands ready to table an Expropriation Bill after the completion of the Parliamentary process to amend Section 25 of the Constitution. This will outline the circumstances under which expropriation of land without compensation would be permissible.

He said to date, 44,000 hectares of state land has been released for the settlement of land restitution claims, and the government will release about 700,000 hectares of state land for agricultural production this year. Youth, women, and people with disabilities and those who have been farming on communal land will be prioritised and their operations for training and allocation of land will be expanded. In addition, a new beneficiary selection policy includes compulsory training for potential beneficiaries before land can be allocated to them. He also mentioned the crippling drought’s effect in many areas of the country and said the commercial use of hemp products, providing opportunities for small-scale farmers, will this year be regulated. The policy will be formulated on the use of cannabis products for medicinal purposes, to build this industry in line with global trends.

That was President Cyril Ramaphosa during his State of the Nation address.