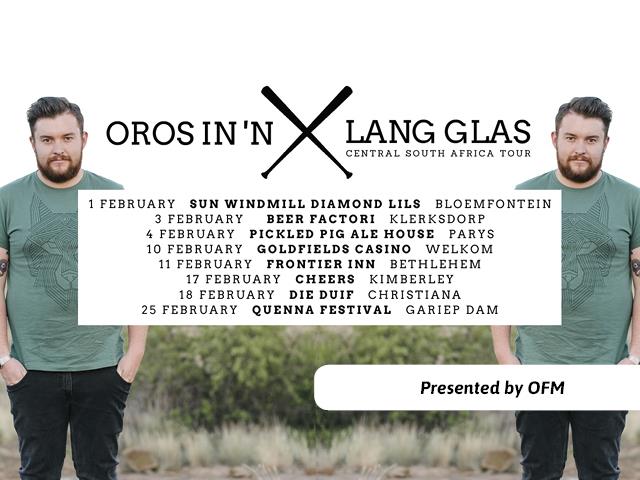 Tickets: At the door

Following their success in 2016, ‘Oros in ’n lang glas’ starts out 2017 with another jam-packed gig calendar, accompanied by special guests, the Tjhabelang Marimba Band. Catch this award-winning, proudly South African talent on tour throughout Central South Africa in February. Tickets are available at the venue. All proceeds of the performances will go towards Tjhabelang, an NPO situated in the rural area of Bainsvlei, Bloemfontein.

This "one man band" from Bloemfontein has over the past few years become one of South Africa's most exciting acts having performed on some of the country’s biggest stages including Oppikoppi, Aardklop, Vryfees, KKNK, Innibos and Gariep. Oros in ’n lang glas has been awarded two Free State Music Awards as well as a Golden Bean Music Award and received a Ghoema nomination. Their latest album "Thula" is available at all good music stores.

Recently, Oros became involved in an extensive Indigenous Dance & Music Programme, hosted by the Tjhabelang non-profit organisation. This successful project reached thousands of people, of whom the majority have never been exposed to any form of arts nor music. Three learners showed exceptional talent and commitment, and were given the opportunity to perform alongside the band at the Free State Arts Festival, the 2016 Presidential Gala Dinner and at community events and schools. The production, comprising of a combination of indigenous musical instruments and commercial mainstream music, received positive responses from the public, community and media alike.

Considering the success of the collaboration, Oros in ’n lang glas and Tjhabelang Marimba Band will be on tour this February. All proceeds of the performances will go towards Tjhabelang.