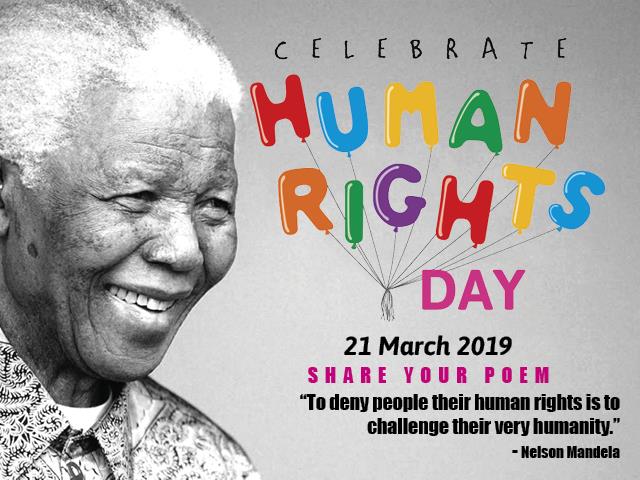 
As freedom of expression is enshrined in the Constitution, and South African not only celebrates Human Rights Day on the 21st of March, but also World Poetry Day, OFM’s inviting you to make your voice heard.

Send your original poem with Human Rights as the topic to poetry@ofm.co.za or Whatsapp your text with the keyword 'poetry' to 084 222 9497 (Data rates apply) and it might be shared on this page in celebration of Human Right Day 2019.

Please keep it clean, no profanity or hate speech allowed. See what this freedom entails according to the Constitution, below. Remember it is not a human right if you infringe upon the rights of others.

1) Everyone has the right to freedom of expression, which includes: a) freedom of the press and other media; b) freedom to receive or impart information or ideas; c) freedom of artistic creativity; and d) academic freedom and freedom of scientific research. 2) The right in subsection (1) does not extend to: a) propaganda for war; b) incitement of imminent violence; or c) advocacy of hatred that is based on race, ethnicity, gender or religion, and that constitutes incitement to cause harm.

Another young listener shared this:

SUID-AFRIKA IS MY HART SE PUNT

According to government, human rights are rights that everyone should have simply because they are human.

In 1948, ironically the same year that the Nationalist Party came to power in South Africa and formalised segregation, the United Nations defined 30 articles of human rights in the Universal Declaration of Human Rights. It established universal human rights on the basis of humanity, freedom, justice, and peace.

Human Rights Day is celebrated annually across the world on 10 December every year.

The date was chosen to honour the United Nations General Assembly's adoption and proclamation, on 10 December 1948, of the Universal Declaration of Human Rights (UDHR), the first global enunciation of human rights and one of the first major achievements of the new United Nations.

Since 1995, Human Rights Day has been a public holiday celebrated in South Africa. It shares the day with the anniversary of the infamous Sharpeville Massacre, which occurred in 1960. This gross violation of human life happened when a march by ordinary South Africans protesting the Pass Laws turned into a police-led bloodbath. The day marked a turning point for the future of South Africa and the struggle for liberation, which intensified in its wake.

South Africa has included indivisible human rights in our own Bill of Rights, Chapter 2 of the Constitution of the Republic of South Africa, 1996.

The articles of our Constitution can only be changed by a two-thirds majority in Parliament, which means it is difficult for anyone, including the government, to take away the basic rights of a citizen.

The Bill of Rights preserved in our Constitution is the cornerstone of our constitutional and representative democracy. The Constitution as our supreme law means that no laws may be passed that goes against it. The Bill of Rights also comprehensively addresses South Africa’s history of oppression, colonialism, slavery, racism and sexism and other forms of human violations. The Bill of Rights embeds the rights of all people in our country in an enduring affirmation of the democratic values of human dignity, equality and freedom.

Download your own copy of the South African Constitution here