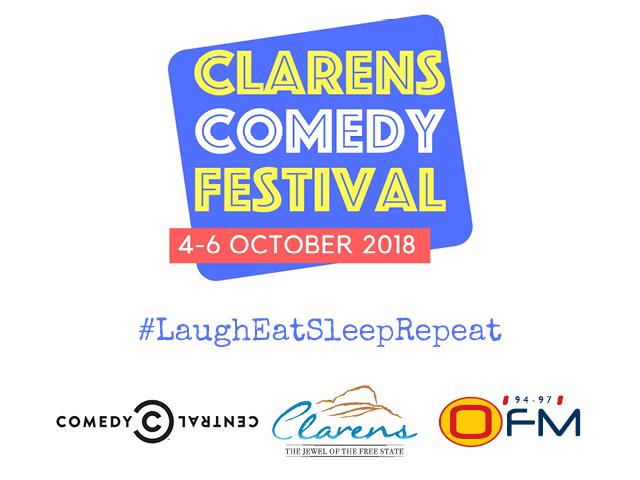 
4 - 6 October 2018 is again time to laugh, eat, sleep, repeat when the Clarens Comedy Festival returns to the picturesque mountain town!

Don’t miss out on a lineup up non-stop laughs including Dave Levinsohn, the three Goliaths, Kagiso Lediga, Nina Hastie and many more!

The Clarens Comedy Festival is now in its third year and from small beginnings it’s grown to a 10 show, three day event at seven venues with 17 comedians.

Accommodation capacity in Clarens is very close to maximum and the Clarens Comedy Festival is the perfect additional activity to participate in while on holiday in this spectacular part of South Africa.

The comedian line-up is a fantastic mix of experience and new faces in the comedy world. Many of the comedians have performed at various international festivals and many are SA award winning comedians.

Expect to see the ever popular Goliath and Goliath Comedians, the legendary SA Comedian Kagiso Lediga, and Loyiso Madinga , ‘The Daily show with Trevor Noah African Correspondent ‘ who just recently returned from performing in New York and the National Arts Festival.

Alongside these acts will also be comedians from Cape Town like Lindy Johnson, who taking SA comedy by the horns and Martin Evans with years of experience that delivers great consistently funny performances. Returning to the festival is multiple award Award winning comic Yaaseen Barnes, and Angel Campey who has performed at all the Clarens Comedy Festivals.

Get tickets for the first show here: https://r99coza.nutickets.co.za/ClarensComedy2018Atmosvuur1

Tickets will also be sold on directly at: https://www.facebook.com/ClarensComedy/, and also through the respective venues.

In proud association with OFM, the sound of your life and Comedy Central.