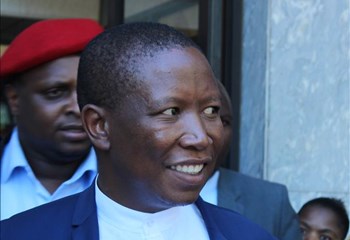 EFF Leader Julius Malema
The Economic Freedom Fighters (EFF) said that it is against the parliamentary process initiated by Parliament looking into the removal of Public Protector Busisiwe Mkhwebane.

The party has described the process which was brought by the Democratic Alliance (DA) as frivolous.

EFF leader Julius Malema said that as a party, they would do whatever was necessary to defeat the motion in Parliament.

The Economic Freedom Fighters said that the inquiry looking into the possible removal of Mkhwebane was without basis.

Malema said that they would defend her.

"We'll oppose this motion, which is a united action by the DA and Ramaphosa faction in the ANC to the end. We have no doubt that this motion will be defeated."

The party said that while it was against the process, it did not agree with Mkhwebane court's challenge.

The Public Protector intends on going to court to try and stop a parliamentary process aimed at removing her from office.

She lodged papers in the Western Cape High Court on Friday.

Political parties represented in Parliament have until Wednesday to submit names to serve on an independent panel to look into the motion to remove the Public Protector.