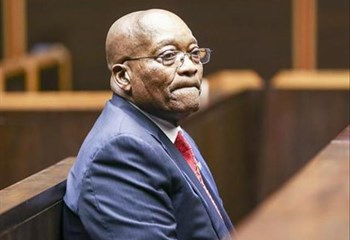 Jacob Zuma
Former president Jacob Zuma told scores of supporters outside the Pietermaritzburg High Court that his rights had been abused because the National Prosecuting Authority (NPA) decided to reinstate fraud and corruption charges against him.

Zuma was addressing his supporters in isiZulu after spending the day in court while his legal team submitted its reasons for a permanent stay of prosecution.

"Even my rights have been trampled upon in a serious of manner, and we have overwhelming evidence that we have not spoken of in public because we respect the legal process. We respect the law, we even respect a madman, we do not interfere with his madness," said Zuma.

Zuma is facing one count of racketeering, two counts of corruption, one count of money laundering and 12 counts of fraud for allegedly receiving bribe money from international arms' company Thales, via his former financial advisor Schabir Shaik, in the multi-billion rand arms deal of 1999.

Thales, accused two, is facing one count of racketeering, two counts of corruption and one count of money laundering.

Thales is set to start its arguments for a permanent stay of prosecution on Tuesday.

Zuma said it was clear that the charges he faced were twofold, being "legal and political". "The case was manufactured by gossiping prosecutors who wanted to catch me and prevent me from [becoming president]," he said.

Zuma's senior counsel, advocate Muzi Sikhakhane, told the court earlier in the day that former Scorpions’ head Leonard McCarthy and then NPA boss Bulelani Ngcuka plotted to have Zuma tried to keep him from becoming ANC president and consequently president of the country. Their conversations regarding the timing of Zuma's prosecution were recorded in the so-called spy tapes.

"You cannot hound an innocent South African like Zuma," said the former president.

Zuma said there was a "major change" in proceedings as KwaZulu-Natal deputy judge president Mjabuliseni Madondo was removed from the case a few days before Monday's arguments were set to start. "They appointed three judges to preside over this matter, meaning the judgment will be split in three ways."

"[It has been 15 years since they first tried to prosecute me], I think it's five judges now who have been appointed to preside over my charges. When they reinstated the charges, we decided with my lawyers to challenge the charges because even the witnesses have forgotten what to say and some have even died," said Zuma.

"The court has given us the chance [over these four days] to state our reasons why this trial should not proceed, we are looking for a permanent stay of prosecution, meaning it must end completely. My lawyers have been given a chance to argue why we say it must not proceed, to state what we say was done by the investigators and prosecutors to violate my rights," said Zuma.

He said his legal team "spoke the whole truth to the judges" by reminding them they were custodians of the law and should "admit that the prosecutors were at fault for not following the law".

He thanked his supporters for voting for the African National Congress in the May 8 elections, which the governing party won.

"I remember the last time I was in court I asked you to vote for ANC because I heard some people saying they won't vote. I decided to speak out because if I did not I would have been guilty of silence when the ANC performed badly at the polls. Voting for ANC is not voting for any individual, you are voting for the movement," he said.

Zuma will not be attending SONA - Foundation